Teacher made Islamophobic remarks during class in Balotra college

December 4, 2022 India Comments Off on Teacher made Islamophobic remarks during class in Balotra college 596 Views 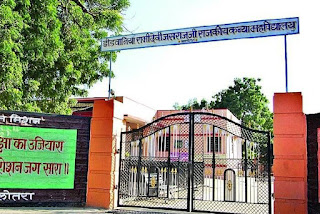 The student says that she is being harassed by the college administration and Hindu students and no action has been taken against the professor.

Student Haseena Bano says that no action has been taken against teacher. pic.twitter.com/k40KA7aRt4

Haseena Bano, a BA first year student, narrating her story, said the history class was going on and around 150-200 students were sitting there and Gautam Buddha was the topic of discussion.

She said during the class, the teacher suddenly said, “Do you all know Aftab has cut Shradhha into 35 pieces and he did not even have mercy Muslims are so merciless.”

She said then he asked, who is a Muslim here? Is there any Muslim here? Nobody said that there was a Muslim sitting here so he went on saying: “Do you know Muslims say that if you kill one Hindu, it is equal to perform Haj, and if they kill two Hindus they will get into heaven. Then he said, “They call us (Hindus) kaafir. They are terrorists and Pakistanis. They are against us and stay away from them.”

Haseena Bano further said that she got up from there and he asked me, “Where are you going? She told him how can you say such things? Is it related to the topic of discussion? He said no. Then how are you saying this, she asked him. He answered, it’s written in the Quran. She said, “I have studied the Quraan, tell me where it is written.” He said he will bring it and show it to her.

She said she left there and went to the office and complained against the teacher but no action has been taken against the involved teacher.

She said the incident took place on 21st November and the report was written on Nov 27.