India to name IIOJK edu institutions, hospitals after killed Indians and their collaborators

July 2, 2022 India Comments Off on India to name IIOJK edu institutions, hospitals after killed Indians and their collaborators 25 Views 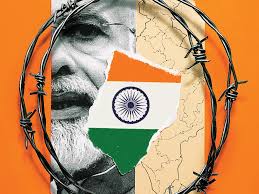 Jammu, July 02 (KMS): As part of its policy to indianise the Indian illegally occupied Jammu and Kashmir, the Modi regime has decided to rename the educational institutions and other important places after the personnel of Indian Army, police and paramilitary forces as well as their collaborators who have died during attacks in the territory.

The announcement in this regard was made by the Lieutenant Governor Manoj Sinha of the territory on Saturday while speaking at an event in Lar area of Ganderbal. He said schools, colleges, universities, hospitals, and even bridges will be named after the killed forces’ personnel and Indian Kashmiri collaborators.