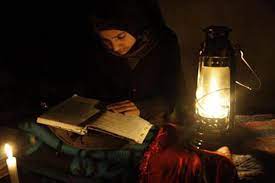 Srinagar, April 30 (KMS): In Indian illegally occupied Jammu and Kashmir, tensions are simmering against the long and unscheduled power outages, which have thrown normal life out of gear.

With temperatures rising across the territory, the local administration, which is run directly by New Delhi, is able to cater to only around 50 percent of the power demand, a part of which goes into powering the 24X7 transmission lines for hospitals, key irrigation stations and official buildings, leaving most commoners high and dry.

The situation is especially bad in rural areas, which receive four to six hours daily supply in intervals that last from a few minutes to a maximum of a couple of hours. The power shortage has also impacted patient care of thousands of Chronic Obstructive Pulmonary Disease (COPD) and other home-bound patients who survive on oxygen concentrators.

For Srinagar resident Sheikh Ashiq, whose father Sheikh Mohammad Sidiq (78), is a COPD patient, every night is a struggle for survival. “Sometimes it’s a death-like situation. We have a generator to keep the (oxygen) concentrator running but not everyone can afford it,” Ashiq, a businessman, said.

The power crisis has forced hundreds of COPD and other poor patients, including those recovering from COVID-19, to once again turn to humanitarian organisations for help. Earlier this month, Tahir Peerzada, who heads SRO Kashmir’s Disaster Management Cell, faced a grim situation when a phone call woke him up in the middle of the night.

It was 1:30am, he recalls, and an anguished Sikh family from Srinagar’s Bemina locality had run out of oxygen for their ailing father. “The family had forgotten to keep a spare oxygen cylinder. Due to a power outage, they couldn’t run the oxygen concentrator. The patient had collapsed but we reached in time to save his life,” Tahir Peerzada said.

“After the COVID-19 wave ebbed, barely four to five patients depended on us for medical oxygen. But since the power crisis started, between 40-50 patients take bulk cylinders from us on a daily basis. For a COPD patient, it is a matter of life and death. How can they afford to buy generators when they take oxygen cylinders from a humanitarian organisation?” he added.

While the winter, which is marked in Kashmir by long power cuts, was relatively better, the power crisis worsened in IIOJK earlier this month, coinciding with the start of Ramzan, the Islamic month of fasting. As the demand soared to 1600 MWs, according to officials, many Kashmiris had to eat ‘sehri’, the pre-dawn meal before the start of daily fasting, and break their fasts at dusk, in perpetual darkness.

“I can’t recall the last time when we had to do without electricity at the time of sehri for seven days in a row. Power intervals are so brief that washing machines can’t complete their runs. Even the battery of a mobile phone doesn’t get fully charged when it is plugged in for the whole night. It is a pathetic situation,” said Mir Fareed, a senior journalist based in Srinagar.

Outraged by incessant blackouts, several protests, mainly led by women, have broken out in different parts of Jammu and Kashmir over the last seven days, including in twin capitals of Jammu and Srinagar, with demonstrators demanding uninterrupted power supply.

The power deficit has also affected water supply to farms and orchards because the lift irrigation stations are facing recurrent shutdowns. Kashmir recorded a rain deficit of 80 percent in March and the parched irrigation canals are triggering grave concerns among the farmers.

In Pampore, the saffron town of Kashmir, a group of farmers staged a protest earlier this week against the authorities. The farmers said that the irrigation plant has turned defunct due to power blackouts. “We are yet to irrigate the paddy fields because there is no water. If the supply is not resumed soon, we may end up without sowing the crop this season,” said Irshad Ahmad Dar, a farmer of Patal Bagh in Pampore.

The hydropower projects in the territory churn out more than 2400 MW power, although the identified hydropower potential in J&K is over 16000 MWs. Since most of the projects are under the direct control of NHPC, J&K gets a dismal 12% of the total power generated from projects under the central sector which are run by NHPC.

The President of Jammu Chamber of Commerce and Industry (JCCI), Arun Gupta, said the problem has triggered a scarcity of water in Jammu. “The industry and common households are facing grave crisis. The government should take cognisance of the matter and ensure uninterrupted power supply to the people.”

Article: In a young Muslim man’s courage, a lesson for us all

Feature: Kashmir’s ban on repair of houseboats is leaving owners without a livelihood