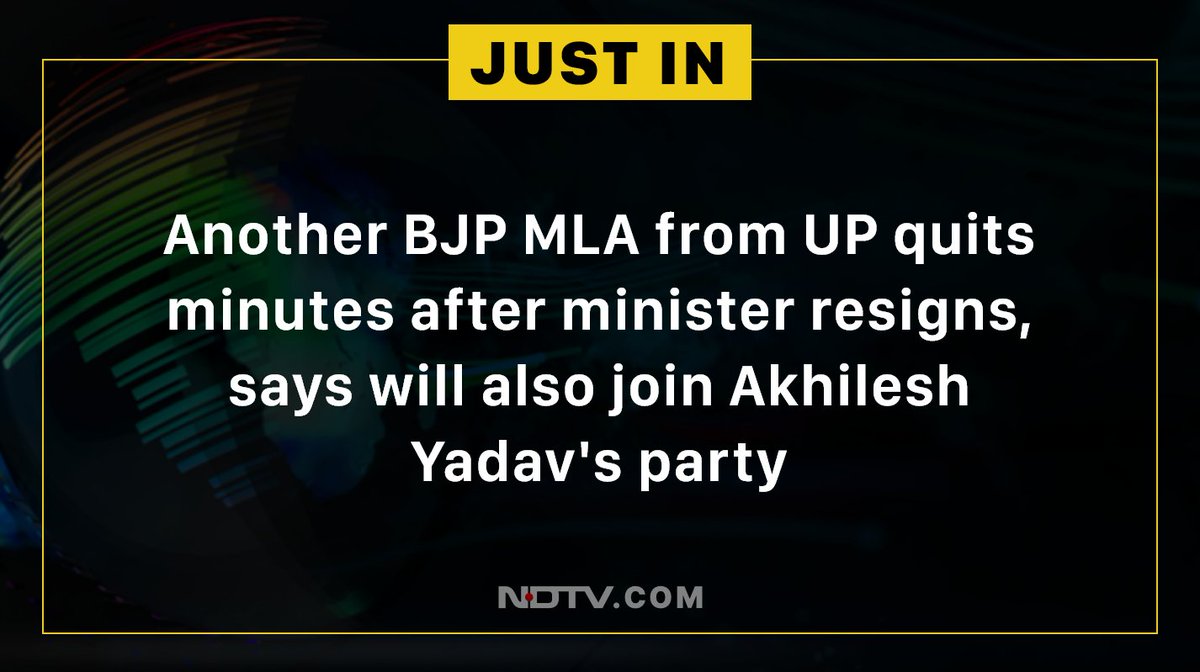 Lucknow/New Delhi, January 12 (KMS): In a massive hit to the Bharatiya Janata Party (BJP) and Yogi Adityanath just before the election in Indian state of Uttar Pradesh, a minister and four MLAs quit, today, and joined the party’s main challenger, Akhilesh Yadav. Swami Prasad Maurya, a top minister in the Yogi Adityanath government, posted his resignation letter on Twitter.

Swami Prasad Maurya, a powerful OBC (Other Backward Class) leader and five-time MLA, joined the BJP in 2016 after quitting Mayawati’s Bahujan Samaj Party (BSP). He was central to the BJP’s plans to draw a critical section of OBC voters to counter Akhilesh Yadav’s Samajwadi Party.

The other three defectors have travelled the same route as Mr Maurya – from the BSP to the BJP to Samajwadi Party.

The exits come as Amit Shah, Yogi Adityanath and top BJP leaders met in Delhi to discuss their election strategy.

“Despite a divergent ideology, I worked with dedication in the Yogi Adityanath cabinet. But because of the grave oppression of Dalits, OBCs, farmers, unemployed and small businessmen, I am resigning,” Mr Maurya wrote in the stinging resignation letter.

He also told reporters: “What impact my exit will have on the BJP will be obvious after the 2022 assembly election.”

As his letter emerged on Twitter, Akhilesh Yadav tweeted a photograph with Mr Maurya, welcoming him and his supporters to the Samajwadi Party.

The exits reinforced the view that resentment in the ranks against Chief Minister Yogi Adityanath is an issue the BJP has left unaddressed.

Mr Maurya’s decision had been months in the making. Sources say two months ago, he had complained to Union Home Minister Amit Shah about Yogi Adityanath. But nothing reportedly came of it.

Keshav Prasad Maurya’s first appeal was very public. “I don’t know why Swami Prasad Maurya quit but I appeal to him, don’t quit but let us talk. Decisions taken in haste can backfire,” he said in a tweet that did not impress the defectors.

“Why did (Keshav Maurya) not think of this earlier? Why is he remembering me today? Right now everyone will talk but when a dialogue was needed, they did not have time,” Swami Prasad Maurya told media.

If the sudden exits stunned the BJP, optimism soared in the opposition camp and one of its key players, Sharad Pawar, weighed in.

Mr Maurya will take more than a dozen leaders with him, said the Nationalist Congress Party (NCP) leader while announcing a joint campaign with Akhilesh Yadav in UP. “Change is coming to UP. Today Maurya has resigned and 13 MLAs are going with him. In the coming days you will see and more people will quit,” he said in Mumbai.

Mr Maurya is the MLA from Padrauna in eastern Uttar Pradesh. His daughter Sanghamitra is a BJP MP from UP.

Last year, another influential OBC face and BJP ally, Om Prakash Rajbhar, had crossed over to the Samajwadi Party.

Uttar Pradesh, India’s most populous and politically vital state, votes from February 10 in seven rounds in an election widely seen as a semifinal of sorts before the national election of 2024. The results will be declared on March 10.