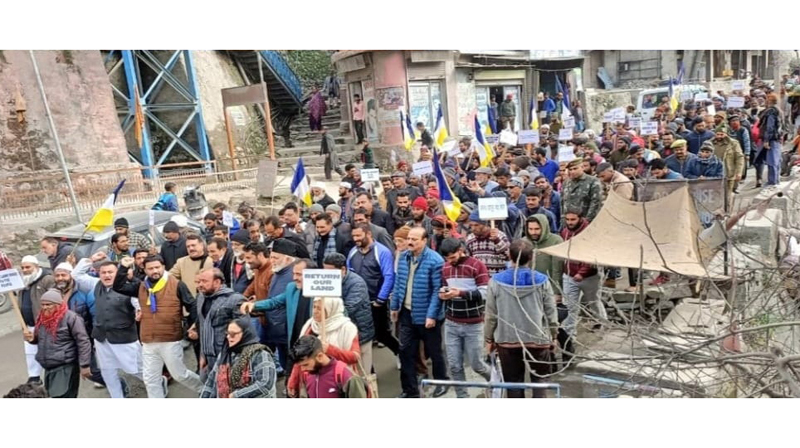 Srinagar, January 24 (KMS): In Indian illegally occupied Jammu and Kashmir, protests were held in different areas against the land eviction drive unleashed by the Indian authorities to effect a demographic change.

Scores of people including civil society members and political parties gathered in Islamabad, Kupwara, Rajouri, Poonch, Kistwara and Ramban areas and raised slogans against the draconian order issued by the BJP regime. The protesters demanded the rollback of the anti-Kashmir move.

The BJP regime has started snatching Kashmiris’ land and properties in the name of anti-encroachment drive in Indian illegally occupied Jammu and Kashmir which is another manifestation of the colonial-settler mindset of the Modi government in occupied Kashmir, they said.

The protesters said that occupation regime is introducing one after other laws aimed at changing the Muslim majority status of the territory into a minority and the eviction drive is part of the same sinister agenda.

The participants of the protest urged the international community including the United Nations to stop the fascist Modi regime from implementing its colonial settler project in the occupied territory.

A protest demonstration was also held against sacrilegious act at Bani in Kathua district. The Bani shopkeepers closed the shutters and took out a protest rally in Bani town raising slogans in favour of immediate arrest of culprits. The protesters said that some anti- social elements are active in this area and want to disturb the peace after creating difference between Hindus and Muslims who are living peacefully.

The youth leader, Mudasar Ali has also demanded probe into the incident and action against the culprits trying to disturb peace.

Meanwhile, the residents including women of Mahrajpora area of Sopore town staged a protest demonstration against the anti-people policies of the regime. The protest affected the vehicular movement for an hour.