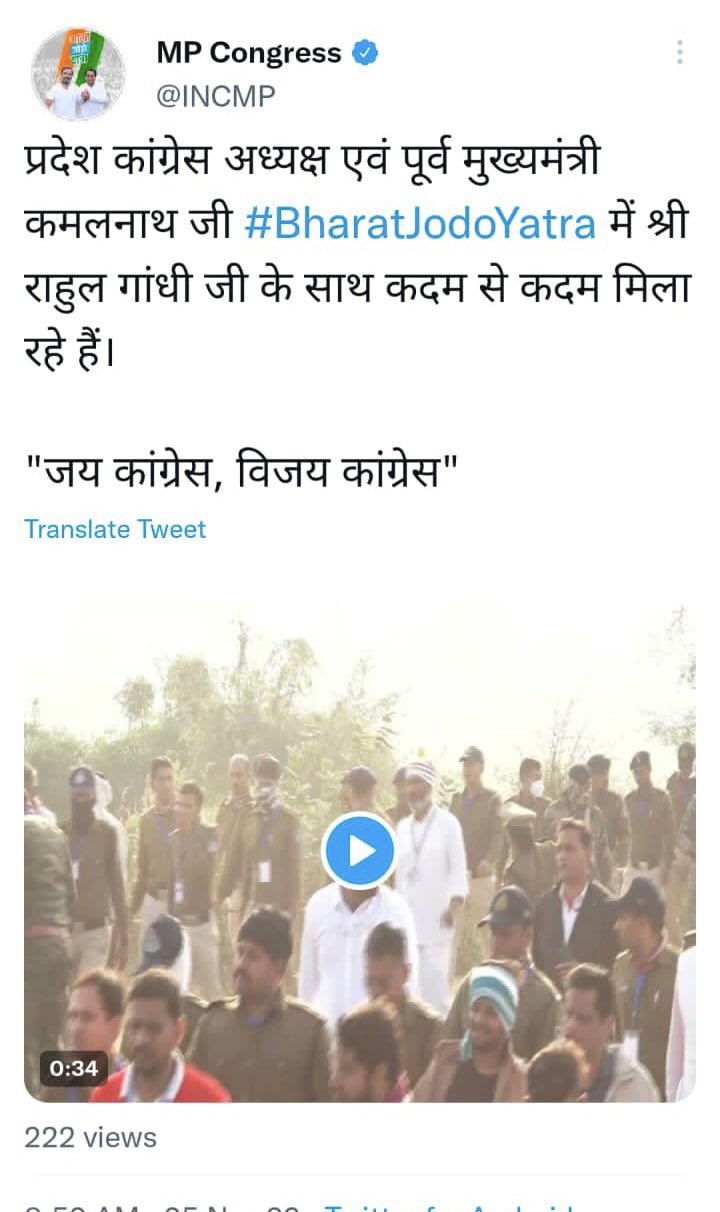 Khargone, November 28 (KMS): The Madhya Pradesh Police have registered a case in connection with a purported video pertaining to pro-Pakistani slogans raised during the Congress’ Bharat Jodo Yatra.

While the Congress alleged it was a doctored video with which the Bharatiya Janata Party was trying to defame the foot march led by Rahul Gandhi, the ruling BJP claimed the opposition party deleted the clip after a pro-Pakistani slogan was heard in it.

Khargone’s Superintendent of Police Dharmveer Singh Yadav said the case was registered at Sanawad Police Station against unidentified persons under Indian Penal Code Sections 153 (B) (imputations, assertions prejudicial to national-integration) and 188 (disobedience to order duly promulgated by public servant) in connection with the video related to pro-Pakistani slogans.

Yadav did not share any other detail and said further investigation into the case was underway. MP Congress Committee’s media department chairperson KK Mishra in a statement claimed it was a doctored video. “The BJP is scared of the success of Rahul Gandhi’s yatra. The BJP made a malicious attempt to defame this march by using a fake video,” he alleged. Mishra said legal action will be taken against Madhya Pradesh BJP media in-charge Lokendra Parashar, who had shared the video on his Twitter handle.

On the other hand, MP BJP spokesman Pankaj Chaturvedi alleged that the video was shared by the State Congress Twitter handle at 8.52 am on November 25 and deleted later after pro-Pakistani slogan was heard in it.

Earlier, the Chhattisgarh Police had registered an offence against a man for allegedly posting a doctored video on social media of pro-Pakistani slogans raised during the Bharat Jodo Yatra.

The Bharat Jodo Yatra, a mass contact initiative of the Congress, is currently underway in Madhya Pradesh.

Political analysts give multiple interpretations of the rising incidents of raising of pro-Pakistan slogans in present-day India under Modi. They say, feeling suppressed as a result of Hindutva policies, some minorities do the same in protest against the Bharatiya Janata Party’s attitude. Also, some secular segments of the society including the Congress party members, analysts believe, raise pro-Pakistan slogans to tease the BJP. K