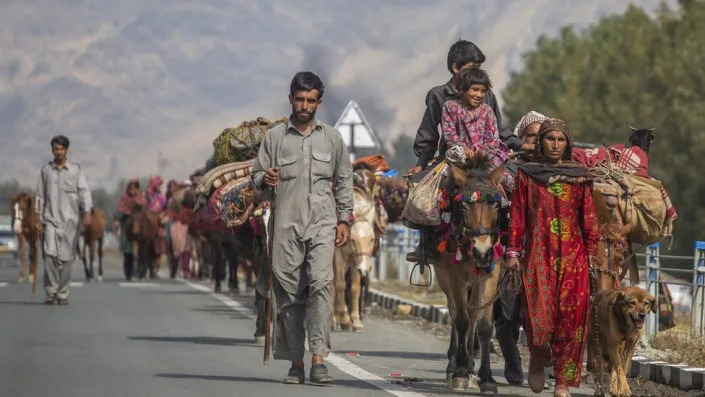 Hundreds of families from the Bakarwal community have so far been served notices by the IIOJK authorities asking them to vacate their forest abodes which they have lived in for decades. The authorities are also demolishing their houses consisting of temporary tents and mud huts in these areas.

Kashmir watchers say the tribe is being targeted because they are Muslims. They say these acts are part of the BJP government’s plan to dispossess Muslims of their land and property in order to change the demographic status of the occupied territory.

Besides the authorities cruel action, changing forest landscapes and weather conditions are making it difficult for this nomadic tribe to maintain its traditional lifestyle.

“People try to paint a rosy picture of our life but ours is, in fact, a saga of endurance and miseries,” says Liaqat Khan, a shepherd from the Bakarwal tribe.

The Bakarwals are part of a 3.4 million-strong nomadic community of IIOJK, whose primary occupation is rearing cattle.

For years, the Bakarwal tribe has been shuttling between Jammu and Kashmir. They spend six months in Kashmir during summers, arriving in the valley in April. By October, they return to the plains of Jammu for the winters.

“We belong to nowhere,” says Zulfi, a young Bakarwal girl in Kashmir. “This is just our summer home.”

Despite various kinds of pressures on the community, many say they are determined to stick to their traditional lifestyle.

“We aren’t giving up on anything,” says Zulfi. “Although we are uncertain about our lives, we are firmly holding on to our traditions, no matter what.”