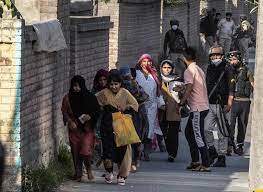 Srinagar, June 22 (KMS): Multiple lockdowns, coupled with unending series of cordon and search operations, raids and crackdowns by Indian troops are taking a heavy toll on the average performance of the students in Indian illegally occupied Jammu and Kashmir.

The IIOJK State Council of Educational Research and Training (SCERT) while revealing a fresh assessment conducted by India’s National Achievement Survey (NAS) of 2021 said that the average performance of the Kashmiri students has declined as compared to the one conducted in 2017.

The SCERT said that in comparison to 2017 survey, average performance of Kashmiri students has declined among the students of third standard, fifth standard and eighth standard in IIOJK.

In the assessment survey of 2021, SCERT said, “Primary class students have suffered more due to school closure.”

“Differences in the learning levels among the students of a same class have increased and 57 percent of the students have scored less than 50 percent,” it added.

SCERT, in the report card, has further said that the assessment survey was successfully conducted throughout occupied Jammu and Kashmir in which competency-based test items (MCQs) were developed by SCERT to assess the learning outcomes suggested by the India’s NCERT.