IIOJK among most dangerous places for journalists in world

May 3, 2022 Reports, Special Days Comments Off on IIOJK among most dangerous places for journalists in world

19 scribes lost life in the line of duty in Kashmir 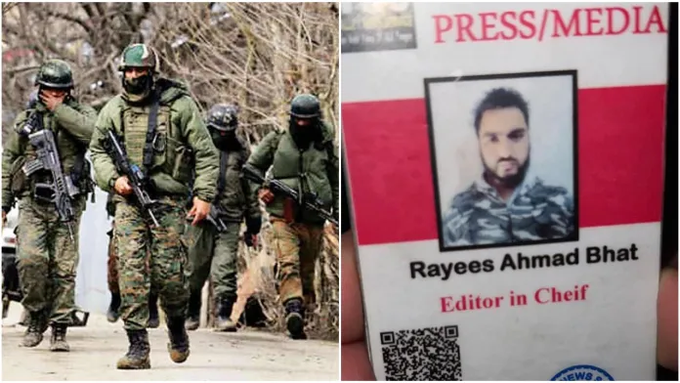 Srinagar, May 03 (KMS): Indian illegally occupied Jammu and Kashmir is one of the most dangerous places of the world where people associated with the press and media are performing their professional duties in the most difficult circumstances.

The report said that in the occupied territory, almost routinely, the journalists face manhandling, abductions, murder attempts and death threats by the Indian troops and all this has made their everyday work extremely difficult. It revealed that the Kashmiri journalists and many other scribes while performing their professional duties were roughed up, injured and detained by the troops on fake charges in the territory.

Indian police and sleuths of National Investigation Agency (NIA) arrested a photojournalist, Kamran Yousuf, on 4th March in 2017 and two journalists, Aasif Sultan and Aqib Javeed Hakim on August 2018 for highlighting the brutalities of the Indian troops during pro-freedom demonstrations in Pulwama. Kamran was later shifted to New Delhi. He was released on bail on 14th March 2018 from Delhi’s Tihar Jail.

Another journalist Qazi Shibli was booked under black law, Public Safety Act (PSA) on 8 August 2019 and was released on 23 April 2020.

A renowned journalist, Sahil Maqbool passed away in March 2018. He was kept in illegal detention by the authorities for several years for highlighting the Indian atrocities in the territory. He was subjected to severe torture during incarceration.

The Indian police physically and mentally tortured, harass and assaulted reporters this year 2022 are Sajad Ahmad Dar, Kamran Yousuf, Majid Haideri, Vikar Syed, Fahad Ahmad Shah, Rayees Ahmad Bhat.
The journalists were also not allowed by the authorities to perform their professional duties during cordon and search operations in the occupied territory.

A freelance French journalist, Comiti Paul Edward, was arrested by the Indian police when he was video-graphing the pellet victims in Srinagar city on International Human Rights Day (December 10) in 2017. Comiti Paul Edward later in an interview said that the Kashmiris were facing the worst kind of military repression and human rights violations at the hands of Indian troops and India did not want these happenings in Kashmir to be known internationally. In his documentary released in 2018, Paul Comiti exposed genocide of Kashmiris by Indian forces.

Annie Gowan, Bureau chief of The Washington Post for India, was restricted by the authorities in a house in Srinagar on 31st July 2018 and was not permitted to move in the territory for reporting.

A driver associated with English daily Greater Kashmir, Bilal Ahmed, and another employee, Farooq Ahmed Parray, were dragged out of the vehicle and beaten up by the troops at Safa Kadal in Srinagar on 13th April 2018 when they were on way back home.

The journalists including Waseem Andrabi, Nisar-ul-Haq, Junaid Gulzar and Mir Burhan received injuries in their faces and necks when the troops fired pellets during a cordon and search operation at Heff Shirmal in Shopian district on January 11, 2019.

Three Kashmiri journalists including Gowhar Geelani, Peerzada Ashiq and Massarat Zahra were booked under strict laws for their writings and social media posts in 2021. “Kashmiri journalists are called to police stations and are questioned and harassed for hours,” the report said.

Although India has snatched every right including right to freedom of press in the occupied territory, Kashmiri journalists are determined to fight India’s assault on media freedom. Local journalist bodies have called upon the international community to come to the rescue of Kashmiri journalists. Victimization of journalists in Kashmir has increased manifold since Aug 5, 2019.

The Indian National Investigation Agency (NIA) and Estates Department locked and sealed offices of Kashmir News Service and The Kashmir Times in Srinagar in October 2020.

In this year 2021 Indian authorities harassed and tried to use false and fabricated charges on a reporter Sajad Gul in Bandipore, while Indian police assaulted several photojournalists and reporters including Saqib Majeed, Safaft Farooq and Qisar Mir when they were doing their professional work during anti-India protests in Srinagar and Pulwama.

The International Federation of Journalists (IFJ) has said that the government-control through advertisement revenue is prevalent in occupied Kashmir and the media is being pressurized to toe the official line or face financial insecurity. In a report titled “Kashmir’s Media in Peril: A Situation Report” released in Brussels, the IFJ said, “The information is controlled by government and security forces” and among other challenges are “out-of-bounds areas, telephone and internet shutdowns; no system in place to get official version of incidents from police or security agencies”.

On the other hand, mobile internet and social networking websites are blocked by the authorities during violent operations and after every killing of youth in the occupied territory.

It is worth mentioning here that during the mass uprising triggered by the extrajudicial killing of popular youth leader, Burhan Wani, by the Indian troops on 8th July 2016, the Kashmir Valley witnessed the most sweeping information blackout.

On the other hand, at least 6 journalists were killed, 108 journalists were attacked and 13 media houses were targeted in 2021in India while the spotlight on the denial of media freedom continued to be on Jammu and Kashmir where journalists are often summoned to police stations, booked, manhandled and beaten by forces’ personnel while their houses are raided.

This was disclosed by a New Delhi-based independent think-tank the Rights and Risks Analysis Group (RRAG) in its India Press Freedom Report.
RRAG conducts risks analysis to prevent violations of human rights and fundamental freedoms with a specific focus on the threats to the rule of law and democracy.

In its “India Press Freedom Report 2021”, RRAG stated that at least six journalists were killed and 121 journalists/media houses including 108 journalists and 13 media houses/newspapers were targeted in India.

Indian illegally occupied Jammu and Kashmir, and other Indian states including Uttar Pradesh, Madhya Pradesh, and Tripura topped the list of areas across India where journalists and media houses were targeted in the last year, reports South Asian Wire.

Of the six journalists killed, Uttar Pradesh and Bihar reported two deaths each while Andhra Pradesh and Maharashtra reported death of one journalist each.

The highest number of journalists/media organisations targeted was in Jammu and Kashmir (25), followed by Uttar Pradesh (23); Madhya Pradesh (16); Tripura (15); Delhi (8); Bihar (6); Assam (5); Haryana and Maharashtra (4 each); Goa and Manipur (3 each); Karnataka, Tamil Nadu and West Bengal (2 each); and Andhra Pradesh, Chhattisgarh and Kerala (1 each),” read the report.

Meanwhile, Since Hindutva BJP leader, Adityanath assumed office as chief minister of Indian state Uttar Pradesh in 2017, 48 journalists have been physically assaulted in the state and 66 have been booked or arrested, a report published by the Committee Against Assault on Journalists has found.

Seventy eight percent of such cases were recorded during the pandemic in 2020 and 2021 alone. The CAAJ report, titled ‘The Siege of the Media,’ offers details of incidents related to the suppression of press freedom in Uttar Pradesh, based on statistics and figures gathered between 2017 and the present day.12/FEB/2022

According to the report, a total of 138 cases of persecution of journalists were registered in Uttar Pradesh between 2017 and February 2022.

CAAJ claims that the report, prepared in collaboration with the Uttar Pradesh People’s Union for Civil Liberties (UP PUCL), includes only those cases which have been verified at the grassroots level. Therefore, the numbers may be fewer than the actual count of such incidents.
Based on the nature of attacks, the report has been divided into four categories – ‘murder’, ‘physical assault’, ‘trial or arrest’ and ‘custody or threat or espionage’.

Since the time Adityanath was sworn in as the chief minister in 2017 till the publication of the CAAJ report, a total of 12 journalists have been killed in the state, 48 physically assaulted, and 66 were booked under various charges or arrested. Twelve cases of intimidation, detention or spying have also been reported.