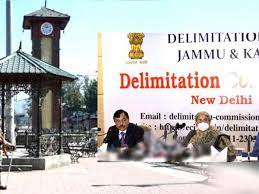 Srinagar, February 26 (KMS): The Delimitation Commission constituted by Modi government to redraw assembly constituencies in Indian illegally occupied Jammu and Kashmir has circulated a revised draft report to its associate members incorporating some changes suggested by them.

Five members of Indian Lok Sabha from IIOJK – Farooq Abdullah, Mohammad Akbar Lone and Hasnain Masoodi of the National Conference and Jugal Kishore Sharma and Jitendra Singh of the BJP – are the panel’s associate members. They had suggested various changes to the earlier draft report of the panel.

As per Indian media reports, the panel has accepted some suggestions and objections of the associate members and rejected others. In their objections and suggestions, the members had urged the panel to redraw some assembly seats. Their suggestions regarding Habba Kadal seat in Srinagar and Suchetgarh seat in Jammu have been accepted. The commission has also agreed not to rename Inderwal assembly seat.

The panel has asked the associate members to respond to the latest draft on or before March 4.

As per the Indian media, after receiving fresh suggestions, the panel is likely to put the report in public domain to get suggestions from people. It was recently given a two-month extension till May 6 to complete its task.