Shabbir Shah thanks people, govt of Pakistan for supporting Kashmir cause

February 5, 2022 IIOJK in focus Comments Off on Shabbir Shah thanks people, govt of Pakistan for supporting Kashmir cause 169 Views 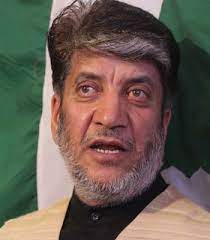 New Delhi, February 05 (KMS): Illegally detained Vice Chairman of All Parties Hurriyat Conference (APHC), Shabbir Ahmad Shah has expressed gratitude to the people and the government of Pakistan for their sincere support to the Kashmiris’ struggle for their right to self-determination.

Shabbir Ahmad Shah in a thanksgiving message from Indian notorious Tihar jail said the observance of 5th February as a Solidarity Day with the freedom-loving people of Kashmir is an ample proof that Pakistan is doing its all efforts for a peaceful settlement of the Kashmir dispute in accordance with the United Nations resolutions.

Referring to the genesis of the Kashmir dispute, he said that the Indian Independence Act of 1947, wherein the people of Kashmir had to decide their own destiny by joining either of the two countries, India or Pakistan, India in sheer and brazen violation of the said Act of 1947, illegally occupied the territory, tarnishing the sanctity of right to self-determination.

Shabbir Ahmad Shah said Pakistan left no stone unturned to help resolve the lingering Kashmir dispute as per wishes of the people of Kashmir and as of now has not succumbed to the nefarious designs of India as an imperialist and fascist country and still continues its logical support to the frantic struggle of freedom of the Kashmiri people against Indian illegal occupation in 1947.

The illegally detained APHC Vice Chairman expressed his hope that Pakistan, as a sincere friend, well-wisher and advocate of the people of Kashmir and as an ambassador of peace, will continue its moral, political and diplomatic support to the Kashmir cause till complete success.