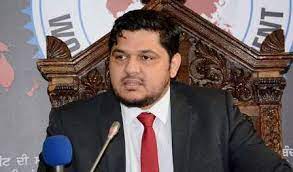 London, January 11 (KMS): Tehreek-e-Kashmir UK President Fahim Kayani has said that the long arm of Indian state witch hunting Kashmiris in occupied Jammu and Kashmir is a slap in the face of promoters of human rights especially the western countries which choose to remain silent on India’s brazen violation of international law and fundamental rights in IIOJK.

According to Kashmir Media Service, Kayani in a statement issued in London said, “The Indian state has a vast network of agents donning different colors and are spread across world capitals to spy on Kashmiris from IIoJK which has resulted in framing of false cases against them.”

“After enforcing graveyard silence in IIoJK by killing, maiming, injuring and jailing innocent, unarmed Kashmiris, the rogue Indian state is now after those Kashmiris and their allies who have become voice of conscience for the IIoJK,” Kayani said, condemning the fraud cases against Dr Dar and Thakur.

“It is a serious concern,” Kayani said, warning Indian agents can go to any extent regarding Kashmir as “Indian state has cultivated various sources in many capitals who keep an eye on Kashmiris and then report any kind of Kashmir activism to Indian missions.”

He urged the host governments to be wary of such nasty Indian actions. “These acts of Indian state violate the Vienna Conventions and are legally considered extra-judicial actions which can be tried in UN Security Council and International Court of Justice,” he added.

Lauding Dr Asif Maqbool Dar as an emerging leader in exile for the IIoJK, Kayani said: “the Indian state and their henchmen in IIoJK are frustrated because Dr Asif has been able to connect people on ground from the IIoJK to Kashmiri diaspora and their allies. This has put up a challenge to Indian state because its war crimes committed in IIoJK are being exposed every day by Kashmiri diaspora through various means including on social media.”

Kayani said the struggle of Kashmiris is taking different turn which demands innovative and pro-active approaches.

“It is more important now that Kashmiris forge unity in ranks to fight this fascist state which is our common enemy. We can’t wait more. Today, it is Dr Asif, tomorrow it can be any one of us,” he warned.

“Tehreek-e-Kashmir UK is open for joint rapid action program among Kashmiri diaspora groups to engage host governments on this serious issue where Indian state through its long arm is using tactics of harassment and attempts of extradition to try and frame false cases against Kashmiris,” Kayani said.

It is opportune time, said Kayani, to bring to fore the fascist acts of Modi-BJP government and tell the world how India is an apartheid state but is wearing a façade of democracy.

“Tehreek-e-Kashmir UK believes a joint rapid action plan will help formulate a strong case against Indian state besides avoid wasting our precious resources,” Kayani said. “Let us put our minds and hands together to push India out of IIoJK.”

Posters urge people to save Bandipore from BJP-Hindutva

Protest in Muzaffarabad for Yasin Malik’s release from Indian jail

Rallies, demos held in AJK against victimization of Yasin Malik by Modi regime