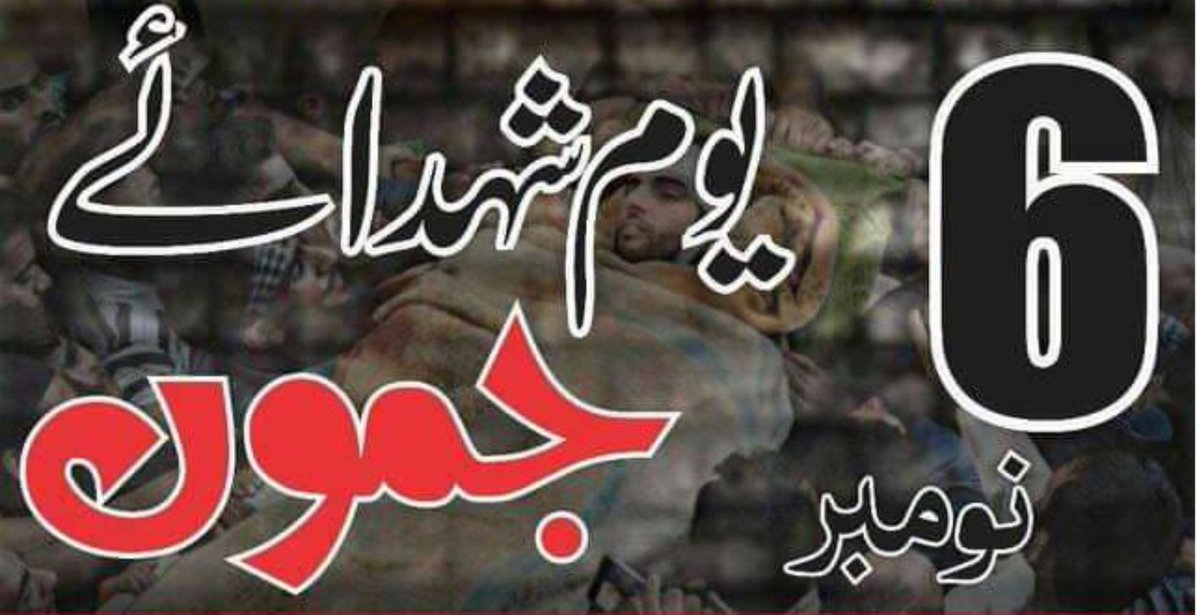 Srinagar, November 06 (KMS): Kashmiris on both sides of the Line of Control and the world over observed the Jammu Martyrs’ Day, today, to reaffirm the resolve to continue the martyrs’ mission till the realization of their inalienable right to self-determination.

According to Kashmir Media Service, hundreds of thousands of Kashmiris were massacred by the forces of Dogra Maharaja Hari Singh, Indian army and Hindu extremists in different parts of Jammu region while they were migrating to Pakistan during the first week of November in 1947.

The illegally detained All Parties Hurriyat Conference Chairman, Masarrat Aalam Butt, in a message from New Delhi’s Tihar Jail said that Jammu massacre was the first act of systematic ethnic cleansing and the worst example of state terrorism after the illegal military occupation of Jammu and Kashmir carried out by India on 27 October 1947. He urged the UN Secretary General to take serious action against India for victimizing the people of Jammu and Kashmir for demanding their inalienable right to self-determination.

The Hurriyat forum led by Mirwaiz Umar Farooq in a statement in Srinagar said the ethnic cleansing of the Muslims of Jammu is an extremely painful chapter in the history of Kashmir freedom struggle.

Other Hurriyat leaders and organizations including Molvi Bashir Ahmad, Khawaja Firdous, Abdul Samad Inqilabi, Kashmir Freedom Front, Tehreek-e-Wahdat-e-Islami, Jammu and Kashmir Insaf Party, and Jammu and Kashmir Peoples League in their statements said that Jammu massacre was aimed at changing the demographic composition of the occupied territory. Posters appeared in different areas of Jammu region eulogizing the sacrifices of the victims of Jammu carnage. The posters were pasted by Jammu and Kashmir Liberation Alliance.

Meanwhile, Indian troops launched a massive cordon and search operation in Rajouri district in Jammu region. The troops cordoned off Khablan and other nearby villages of the district and launched searches. They also closed vehicular traffic from Thanamandi to Rajouri.

On the other hand, speakers at a roundtable conference organized by APHC-AJK chapter at its office in Islamabad, today, to pay homage to Jammu Martyrs said that the Kashmiris were determined to continue their struggle till they were granted their inalienable right. Pasban-e-Hurriyat Jammu and Kashmir held a rally in Muzaffarabad to pay tributes to Jammu Martyrs of 1947. The protesters raised high-pitched slogans against India and in favour of Kashmir’s freedom from Indian yoke.

In India, a Hindutva mob beat up two Christian pastors and disrupted a prayer meeting in Biler area of Dhamtari district in Chhattisgarh state. The attackers set on fire the copies of Bible, and asked the pastors not to hold prayer services.

Previous Feature:  74 years after Jammu Massacre, sufferings of Kashmiris continue
Next No facility for dengue testing in IIOJK, 21 found positive

Indian police arrest several youth including a woman in Bandipora

APHC asks India to keep education out of hatred-based politics