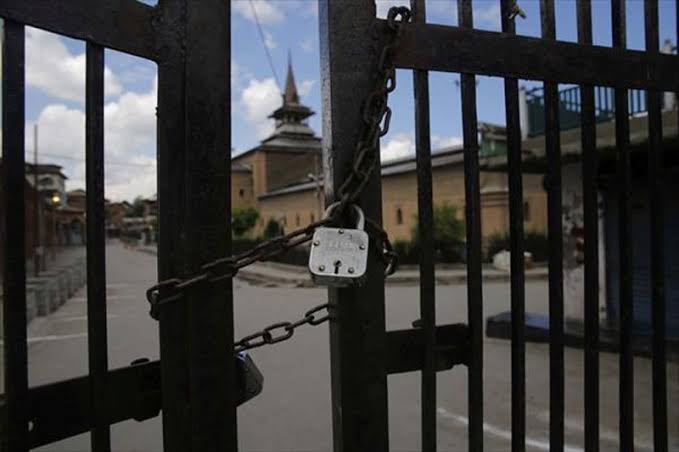 Srinagar, October 16 (KMS): In Indian illegally occupied Jammu and Kashmir, the Hurriyat forum led by Mirwaiz Umar Farooq, who continues to be under illegal House arrest, has strongly condemned the forcible closure of Jamia Masjid Srinagar by the authorities, disallowing thousands of people from offering congregational Friday prayers there.

The Hurriyat forum in a statement issued in Srinagar said, the earlier pretext of closing the mosque for Covid-19 spread prevention, stands totally exposed. The grief and deep hurt this reprehensible act causes people who for decades have been offering prayers in this central mosque cannot be expressed in words, it added.

The statement said, the environment created in IIOJK by the rulers is so suffocating and intimidating that no one dares to raise voice to ask why even the basic right to offer prayers is denied. All efforts are being made to silence the people of IIOJK into submission, it deplored.

The forum said, the recent continuing crackdown in every nook and corner of the valley has seen arrests of more than a thousand people so far, picked up by the authorities, and then illegally detained under criminal charges and draconian laws. Teachers, journalists, traders, youngsters or anyone the authorities want is summoned to police stations for questioning in an environment of fear and reprisal so overwhelming that no one dares to ask why, but has to oblige, it maintained.

The forum said, this systemic oppression and environment of intimidation to choke people, furthers alienation and dissent, with many youngsters opting for violent means to resist. And in this manner the viscous cycle of violence and bloodshed keeps feeding the Kashmir conflict, with human costs and the violation of human rights borne by the people.

It said no amount of repression and denial to engage in resolving the conflict will wish it away and there is no alternative but to resolve the Kashmir dispute.