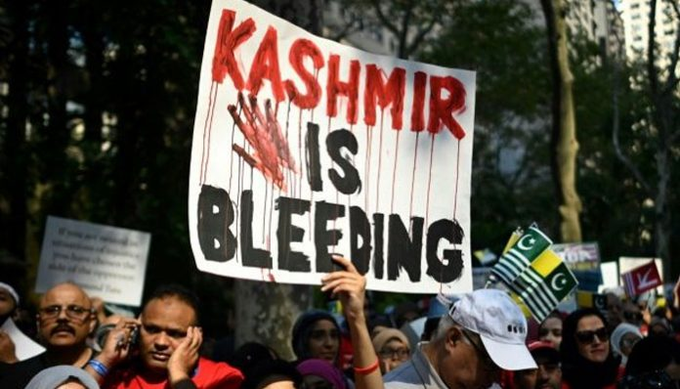 Geneva, September 15 (KMS): Pakistan has denounced India’s unlawful measures to deprive the Kashmiri people of their right to self-determination, warning that the Indian state machinery has turned into a veritable arm of oppression in Indian illegally occupied Jammu and Kashmir.

Pakistani ambassador to the UN office at Geneva, Khalil Hashmi, during a general debate in the ongoing 48th session the UN Human Rights Council said, “The Indian state machinery – from a pliant judiciary to a hand-picked local bureaucracy – has become a veritable arm of oppression, breeding impunity,”,.

He thanked the UN High Commissioner for Human Rights, Michelle Bachelet, for reminding the 47-member Council of India’s grave human rights violations in IIOJK. He said that the devastating human rights impacts of illegal actions of 5th August 2019 continue to be chronicled by UN Special Procedures, civil society, and global media.

The Pakistani envoy said, even this month, as the Council meets with India as its member, the Hindu nationalist regime had brutally imposed yet another layer of curfew and communication clampdown in the disputed territory, following the custodial death of iconic Kashmiri leader, Syed Ali Gilani.

Khali Hashmi said, the degrading treatment of Syed Gilani’s mortal remains and their burial against wishes of the deceased epitomizes India’s moral bankruptcy. More importantly, he added, this speaks of Syed Gilani’s indomitable spirit that even in his death, he continued to cow the occupation forces.

The Pakistani envoy pointed out that driven by a fascist mindset, India continues to pursue and accelerate its state policy of demographic change of the disputed territory under the garb of dubious laws and administrative measures as evident from grant of 4.2 million domicile certificates to non-Kashmiris, and permission to buy property, and seek local jobs. He said New Delhi is grabbing land, properties and natural resources of the indigenous Kashmiri people, and disenfranchising them of their distinct cultural and religious identity.

“These unlawful measures are designed to deprive the Kashmiris of their right to self-determination, constituting breach of India’s obligations under the UN Security Council resolutions and 4th Geneva Convention,” he said.

The Pakistani envoy said over 900,000 occupation forces have transformed the occupied territory into a black-hole of rights violations behind an iron curtain of military siege, and through continued denial of access to independent observers. During this year alone, India has summarily executed over 100 innocent Kashmiris, illegally detained 537 Kashmiris, and demolished close to 50 houses during fake encounters, he pointed out.

Khalil Hashmi said India has muzzled local media, and silenced human rights defenders through intimidation, harassment and reprisal. He added that the UN mandate holders have warned that the situation in IIOJK was in a ‘free fall’.

The Pakistani envoy maintained that the UN Human Rights Council must call upon India to rescind its demographic change, halt its violations, and allow access to independent observers. He said that the UNHRC should mandate a Commission of Inquiry to investigate Indian abuses, as recommended by the two reports by the Office of the UN High Commissioner for Human Rights. He further stated that the global flag-bearers of human rights should publicly call India out for its atrocities in IIOJK, and close the persistent gap between their words and actions. He added that the UN High Commissioner for Human Rights should issue an updated Kashmir report in exercise of her prevention mandate.

Previous Article: J&K: How the BJP u-turned on tribal empowerment in J&K after Article 370 was read down
Next Conference adopts resolution to continue struggle for independence of Junagadh State