Muslim Institute to organize national conference on Junagadh next week

September 10, 2021 Seminar Comments Off on Muslim Institute to organize national conference on Junagadh next week   147 Views 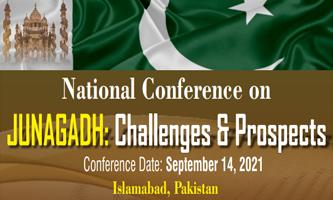 Islamabad, September 10 (KMS): Muslim Institute, an Islamabad-based think-tank, is going to organise a national conference on Junagadh on September 14 at the National Library in Islamabad.

The conference titled ‘Junagadh — Challenges and Prospects’ will be attended by historians, law experts, international relations’ analysts from different universities and research institutions.

Through the conference, the Muslim Institute wants to draw attention towards the need of perpetual efforts on political, legal, diplomatic and academic fronts for legal and just resolution of the Junagadh State dispute. It has called upon the international community to support the case of Junagadh and condemn the violation committed by India.

The national conference on “Junagadh: Challenges & Prospects” is aimed at promoting an academic discourse on Junagadh at the national level while highlighting the history of the Junagadh Issue, recent developments on the issue, its status under international law, and the role of Junagadh community in Pakistan in a wider context. The conference is divided into 6 sessions – an inaugural session, four academic sessions, and a concluding session.

Like Loading...
Previous JKPL condemns arrest of party Chairman, others in IIOJK
Next TeH leader Raja Merajuddin Kalwal’s mother passes away in Srinagar