September 9, 2021 Features Comments Off on Feature: Ridiculous fake news by Indian media might be created under govt support: experts

Global Times Several Indian media outlets have become a global joke for publishing fake news claiming “Pakistan is invading Afghanistan this week,” while experts from American think tanks said that what these media have done sounds pretty ridiculous but it is not the first time this happens. Actually, Indian media …

END_OF_DOCUMENT_TOKEN_TO_BE_REPLACED

Kolkata, Sept 09 (KMS):  Trinamul Congress supremo Mamata Banerjee has said that the Indian Prime Minister, Narendra Modi and Home Minister, Amit Shah are renewing their pressure tactics to intimidate her party leaders through the investigative agencies while she is busy fighting the Bhowanipore Assembly by-poll to become an MLA …

END_OF_DOCUMENT_TOKEN_TO_BE_REPLACED

September 9, 2021 IIOJK in focus Comments Off on Owaisi denied permission for meeting in UP’s Barabanki 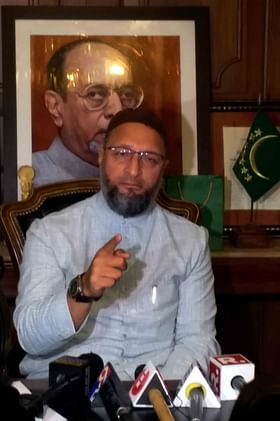 Lucknow, Sept 09 (KMS): The Barabanki district administration in India’s Uttar Pradesh state denied permission for a meeting of All India Majlis-e-Ittehadul Muslimeen (AIMIM) chief Asaduddin Owaisi citing security reasons. Owaisi is currently on a tour of UP, campaigning for his party ahead of the state Assembly polls. He had …

END_OF_DOCUMENT_TOKEN_TO_BE_REPLACED

Article: Mathura Meat Ban: What are the real motives and possible ramifications?

September 9, 2021 Articles Comments Off on Article: Mathura Meat Ban: What are the real motives and possible ramifications?

(The Wire) While the legality of such ban orders was upheld by the Supreme Court, the motive warrants a serious debate because the sale is intimately linked to the rights and livelihoods of a large number of people.

END_OF_DOCUMENT_TOKEN_TO_BE_REPLACED

Rising Kashmir Basit Parray Due to its exquisite design, quality and credibility; handicrafts of Kashmir especially carpets are renowned world-over. The skill of handmade carpet weaving is an intrinsic part of Kashmiri culture. The carpet industry provides employment to a large number of people and substantially contributes to the exports …

END_OF_DOCUMENT_TOKEN_TO_BE_REPLACED

Srinagar, Sept 09 (KMS): In Indian illegally occupied Jammu and Kashmir, the Peoples Democratic Party President, Mehbooba Mufti has said that Taliban have come to fore as a reality. Mehbooba Mufti in a tweet said, “The Taliban, which have taken over the reins of Afghanistan, must follow true Sharia (Islamic …

END_OF_DOCUMENT_TOKEN_TO_BE_REPLACED

September 9, 2021 IIOJK in focus Comments Off on Committed to fight for statehood restoration, Article 370: Dr Farooq

Srinagar, September 09 (KMS): In Indian illegally occupied Jammu and Kashmir, the National Conference President, Dr Farooq Abdullah has said that his party is committed to fight for the restoration of Statehood and Article 370. Dr Farooq talking to reporters in Srinagar said that his party would not shy away …