Feature: ‘I was framed for being a Dalit, 6 years of my life were taken away from me’

September 8, 2021 Features Comments Off on  Feature: ‘I was framed for being a Dalit, 6 years of my life were taken away from me’ 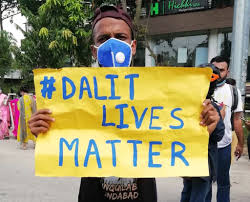 During His six years in prison, he had a recurring dream: he would fly, but fall to the ground when he saw his worried wife. Then, he says, he would catch a bus home. And that was when he would wake up to reality, inside his cell at Tihar jail, awaiting trial in a POCSO case.

Released last month, after a city court held that he was “falsely framed” because of his Dalit identity, the 55-year-old man — he did not want to be named — says the dreams have stopped.

“I always used to fly in my dreams. The strange thing is that now that I have been released, I have stopped flying in my dreams. I want to fly again, one more time,” he says.

The case against him was registered on the complaint of a man who accused him of sexually assaulting four minor girls. The prosecution accused him of being a “serial sexual” offender. He was arrested on May 18, 2015, when the alleged incident took place.

On August 7, a Delhi court acquitted him, observing that he had been “falsely framed due to prejudicial disposition of the parents towards the accused, who belongs to the Dalit community”. He was released the same night.

The complainant was found to have filed a false case after the 55-year-old objected to his dog defecating outside his house in outer Delhi district.

The court, in its order, said the “parents of the victim girls indulged in the sinister act of tutoring their daughters in a most brazen and shameless manner and merely because accusations or charges against the accused are grave, severe or despicable”.

In a rare instance, it also ordered the state to pay a compensation of Rs 1 lakh to the accused within two months, observing that this was a “symbolic amount and without prejudice to his legal rights and contentions.”

When the judge announced the verdict, the 55-year-old broke down. After six years, he would be with his family.

A month after his release, he is still trying to get used to his freedom. He has been vaccinated, but doesn’t want to step out. “Everything has changed. Everyone wears a mask, people think twice before going out. I spent an even harsher lockdown in jail. To be honest, I am not in a right frame of mind. I will take my time going outside,” he says.

He says for the first few years in prison, he was angry, but has now learnt to forgive. Taking out a copy of the Bible, he says: “I barely understand what is written in this. But I now know God is one. I forgive them for filing the case. I feel no anger anymore. I was framed for being a Dalit and six years of my life were taken from me”.

His wife, 58, works as a ragpicker, earning Rs 100 on a good day. His 30-year-old son gets Rs 12,000 per month, working 12-hour shifts at a denim factory. They have a debt of Rs 5 lakh – the cost of moving houses, seeking to flee from discrimination, and mounting daily expenses.

The family of 12, including his wife, children, grandchildren and other relatives, lives in two cramped rooms, sleeping on makeshift beds. They have defaulted on their rent for three months now, and owe Rs 20,000 to the landlord. But this is not their biggest challenge.

“The last place where we stayed, the people of the area hated us for being born as Dalits. Day and night, they would try to make us leave,” says the wife.

Six years ago, the 55-year-old worked as a security guard. “He had a spring in his step and worked overtime,” says his former employer, a senior bank manager who testified on his behalf in court.

Now, he is afraid of crossing the road, the honking sound of vehicles disturbs him and he often forgets his way home. “I have forgotten how to use a smartphone. I have learnt to switch it on and off. I can’t even buy groceries. I have lost my appetite. I am exhausted all the time. I can’t work,” he says.

In Tihar, he learnt how to paint. His favourite subjects were politicians, Hindu gods, bank-related advertisements, and portraits of actor Deepika Padukone.

“This kept me sane. I spent the lockdown in jail. It was harsher. I slept inside a cell with a dozen other people, without maintaining social distancing. I could not speak to my wife due to the lockdown. But I survived,” he says.

Now that his trial is over, he wants to visit his ailing mother in Rajasthan. “She keeps calling me, crying on the phone. I don’t have money for the trip. Nor do I have the strength. I want to go and see her,” he says. — Courtesy Indian Express

Previous Article: How to dismantle Hindutva?
Next Article: The little farce of Brahmin welfare schemes is a sign of India’s great tragedy