September 2, 2021 IIOJK in focus Comments Off on Pakistan to observe official mourning after Syed Ali Gilani passes away 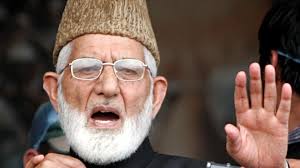 Islamabad, September 02 (KMS): Prime Minister, Imran Khan, has said that the country will observe a day of official mourning after the veteran Kashmiri Hurriyat leader, Syed Ali Gilani, passed away on Wednesday night.

Syed Ali Gilani, who has been under house arrest for the most of the last decade, passed away at his residence in Srinagar after prolonged illness. He was 92.

Imran Khan in a tweet said: “Deeply saddened to learn of the passing of Kashmiri freedom fighter Syed Ali Geelani who struggled all his life for his people & their right to self determination. He suffered incarceration & torture by the Occupying Indian state but remained resolute.”

He further wrote in a tweet: “We in Pakistan salute his courageous struggle & remember his words: ‘Hum Pakistani hain aur Pakistan Humara hai’. The Pakistan flag will fly at half mast and we will observe a day of official mourning.”