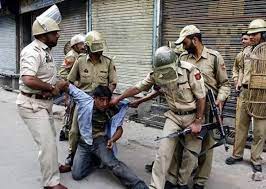 Srinagar, August 28 (KMS): In Indian illegally occupied Jammu and Kashmir, the Jammu and Kashmir Democratic Freedom Party (DFP) has once again appealed to the international community to fulfill their responsibilities regarding resolution of the lingering Kashmir dispute to bring a halt to the bloodshed in the territory.

The DFP spokesman in a statement issued in Srinagar said the Indian troops are on a killing spree in IIOJK and they were giving the impression that the entire population of the territory is moving around carrying arms and ammunition. “The fact is that India’s one million armed forces have turned Jammu and Kashmir into hell and anyone who tries to speak out against India’s colonial and imperialistic tactics is either killed or booked under the black laws,” he said.

The spokesman said the silence of graveyard is being enforced in the occupied territory by implementing draconian laws like Public Safety Act (PSA) and Unlawful Activities (Prevention) Act (UAPA). “Even now, thousands of freedom lovers, including Democratic Freedom Party chief Shabbir Shah, are suffering the toughest hardships in remote jails. New Delhi, on the other hand, has launched a vicious propaganda campaign against the Kashmiri people to deceive its own people and the world community,” he added.

The DFP spokesman said at a time when there is an atmosphere of conflict resolution all over the world, India is constantly denying the basic human and political rights to the people of IIOJK. The peace loving Kashmiri people hope that international organizations will play their part in restoring their rights by their direct and practical intervention, he maintained.