August 19, 2021 IIOJK in focus Comments Off on Curbs intensified in Srinagar to prevent Ashura processions 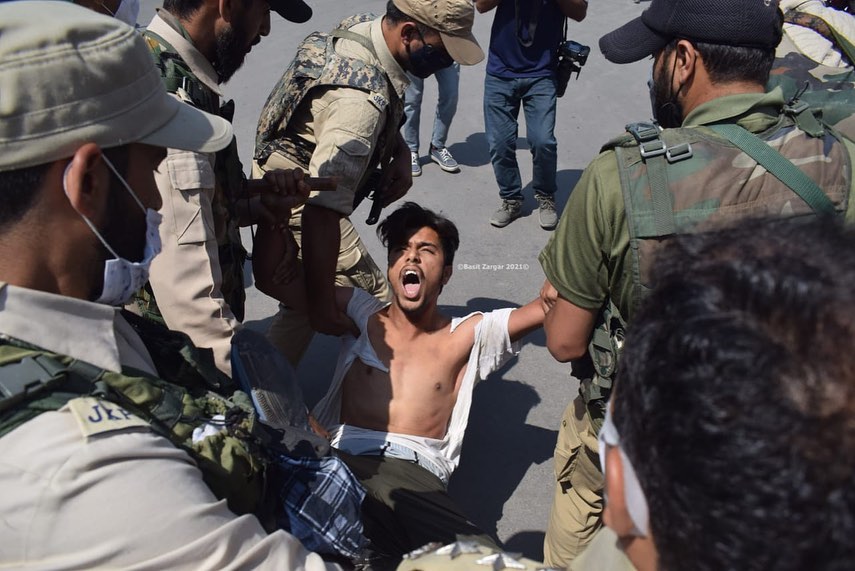 The curbs were intensified in Lal Chowk, Alamgiri Bazar, Zadibal, Lalbazar, Shaheed Gunj, Hawal, Aabi Guzar and other areas of Srinagar to restrict the movement of people and stop them from converging on the traditional routes for taking out joint processions of 10th day of Muharram. The occupation authorities deployed Indian forces’ personnel in strength in Srinagar and other parts of the Kashmir Valley to prevent Muharram processions. Traditionally, the main procession of 10th Muharram in Srinagar used to start from Aabi Guzar and culminate at Zadibal after passing through different areas. However, the occupation authorities banned the two major processions in 1989 fearing that these may turn into pro-Azadi demonstrations.

Indian police arrested Hurriyat leader and the Chairman of Tehreek-e-Fikr-o-Astiqad, Maulana Sarjan Barkati, in Badgam, today, when he was on his way to attend a conference on Shuhada-e-Karbala.

Hurriyat leaders and organizations including Maulana Masroor Abbas, Abdul Samad Inqilabi and Jammu and Kashmir Mass Movement in their statements strongly denounced the curbs on the Muharram processions and use of brute force on mourners. Dozens of mourners were injured when Indian police used brute force on a procession of 8th Muharram at Jahangir Chowk in Srinagar on Tuesday.

A report released by Kashmir Media Service, today, said fascist Narendra Modi has turned IIOJK into present-day Karbala for the Kashmiri people. It said Modi is the Yazid of the time for the Kashmiri people and India has emerged as modern Yazidi regime by inflicting untold miseries on innocent Kashmiris. The report added that brave Kashmiris are reviving memories of Karbala by putting up strong defiance against Indian tyranny.

Meanwhile, Indian troops in their fresh act of state terrorism martyred one Kashmiri youth during a cordon and search operation in Thanamandi area of Rajouri district, today. Earlier, two Indian troops, including a Junior Commissioned Officer, were killed and another soldier was injured in an attack in the same area. The operation continued till last reports came in. Indian police arrested four persons including Hurriyat leader, Zafar Akbar Butt, in a fake case registered against them, last year.

In Agra, Muslim religious leader, Abdul Khubaib Roomi, and his son were booked for raising objection over the Indian flag hoisting ceremony on Indian Independence Day in Utter Pradesh. Mazdul Kuddoos Khubaib Rumi had objected to the holding of Independence Day official celebrations in the Jamia Masjid premises. In an audio that went viral, he said religious places should be avoided for such events. KMS

Previous ‘Imam Hussain’s sacrifices will guide humanity till Day of Judgement’
Next Curbs on Muharram processions, use of force on mourners in IIOJK denounced