Delhi, August 10 (KMS): It rained communal slogans in the heart of the National Capital, a few kilometers away from Parliament at a rally was called for by lawyer Ashwani Upadhyay

It rained dangerous communal slogans this Sunday, August 8, in the heart of the National Capital. Multiple right-wing organisations got together and gathered to spew hate in a high security zone, just a few kilometers from the Parliament, which is in session. Many in the gathering raised calls for violence and massacre againt the Muslim community shouting “Jab Musle Kate Jaenge Ram Ram Chillaayenge”.

The derogatory slur M***e, is a reference to Muslims often used for inciting hate against the community, especially in Hindi speaking North India. These crowds chanted that Muslims will be forced to say “Ram Ram” while they are hacked to death. A clear call for violence against the community. The hate gathering took place near Jantar Mantar, in the jurisdiction of the Connaught Place police station, and is a short distance away from the Delhi Police headquarters.

So this happened yesterday. In the peak hours of the day, in the heart of the capital of India, 5 minutes from the parliament. There were slogans by 100s, led by a member of the ruling party, making calls for genocide of Muslims. No action by police.

These hate mobs came together on a Sunday, a day that saw a heavy footfall of visitors to the Connaught Place commercial area that one end of this road leads to. Prior permission is always needed to hold any gathering or protest year, though it is not yet known if Delhi Police gave this group permission to hold this gathering. As the video clips that were released on twitter on Sunday night showed, no police action was taken against the mob when they began chanting hate slogans. For the past weeks, the Kisaan Sansad, or the farmers parliament, has been held peacefully under a tight security watch on all working days. No untoward incident, or hate speech remarks have been reported from there. Nevertheless, there is always a heavy security deployment in the area, including riot control personnel with tear gas launchers etc.

However, on Sunday the farmers were not there, instead there was these groups of men and women shouting hate slogans, professing right-wing communal ideologies who gathered at Jantar Mantar, ostensibly to demand a repeal of what they termed ‘anti-Hindu’ clauses from the Indian Penal Code (IPC). According to a report in  Clarion India, the crowd swelled to hundreds at Jantar Mantar reportedly demanding  “repeal of British era laws” which they said were “anti-Hindu”. They also demanded one code for the entire country, stated the news report, adding that “disinformation, lies, hate speeches and Islamophobia” marked the event.

On Monday morning the Delhi Police reportedly “registered an FIR against unknown persons” for raising ‘inflammatory slogans’ at Jantar Mantar. According to a report by Indian Express, the Police have registered an FIR under Sections 153-A (promoting enmity between different groups), against the unknown persons. Delhi Police told the media that the organisers had no permission for the rally and they have also added Sections of 188 (disobedience to order duly promulgated by public servant) and 51 for violation of DDMA Act pertaining to violation of Covid guidelines, stated the news report.

Supreme Court lawyer and former Delhi Bharatiya Janata Party (BJP) spokesperson Ashwini Upadhyay, on Monday morning, reportedly sent a text message to the Delhi Police, saying some people had tried to malign his event, adding that he left the venue when the event ended at 12.15 P.M reported the IE. His text coincides with the fact that the videos where open threats are being issued against the Muslim community have gone viral.

Shipra Srivastava, media in-charge of ‘Bharat Jodo Movement’ had told the media that on Sunday, “There was a protest against colonial laws used to suppress Indians by the British, which still exist. We were there to protest against those laws and for a Uniform Civil Code because our demand was that there should be one rule in one country… There was no such (inflammatory) slogan in my knowledge… there were 5,000 people and if five-six people in some corner would be shouting such slogans, then we would disassociate ourselves from them.”

At the rally Ashwani Upadhyay also addressed the gathering amidst chants of “Jai Shree Ram” and “Bharat Mata Ki Jai”. The faces of the men who raised anti Muslim hate slogans were seen in many videos now going viral on social media. However, senior advocate Vikas Singh the president of the Supreme Court Bar Association, said he is “not aware of the event at all” hence would not comment. Meanwhile Senior Advocate Pradeep Kumar Rai the association’s vice president added that he too was not aware but would take the matter up with the committee if details were shared.

He had given the call for the rally on various social media channels along with  ex-journalist Pushpendra Kulshreshtha asking people to gather on the streets in large numbers as other right-wing influencers such as politician Kapil Mishra and army veteran Lt Gen (rt) GD Bakshi will also be there. On Sunday, August 8, he led hundreds of protesters and demanded that “222 black laws” they say were “made by the English” be “abolished from the penal code”. Clarion India, quoted Upadhyay saying, “These laws were made to jail Veer Savarkar (a pre-Independence Indian leader known as the founding father of the Hindu nationalist politics); to hang Bhaghat Singh, Sukh Dev and Raj Guru. This law was also made to Lathi charge Lala Lajpat Rai.” He then reportedly “cited the example of recent post-election violence in West Bengal and migration of Hindus from Kashmir at the outbreak of militancy to explain how the Police Act of 1800s stops police from “firing” at people, adding that “these British laws were made without any consultation with the people of India.”

According to the news report, some of the participants distributed flyers allegedly carrying genocidal hate content in Hindi against Islam, stated the report quoting a flyer titled “Islam Ka Vinaash” (Annihilation of Isam). “Hindu groups always protest against Muslims which shows their cowardice. They stay within constitutional and legal limits. This is possibly because Hindus are not capable of committing  genocide,” said the flyer, reportedly adding a call to violence stating that Hindus must “resort to terrorism to fight terrorism… Don’t protest, rebel. Don’t make noise. Annihilate them.” Journalists soon began sharing the hate speech, which then went viral overnight.

The Print, in a 2018 profile on him, had described Ashwini Kumar Upadhyaya, a lawyer-politician from the BJP who had also “filed PILs on issues that are on top of his party’s agenda — such as yoga, Vande Mataram and nikah halala.” It reported how in 2016, Upadhyaya had filed a public interest litigation before the SC to “make yoga compulsory in all schools for children between 6 and 14 years of age,” and another PIL to “make singing the national anthem and Vande Mataram compulsory in schools”. He had also filed a PIL seeking to make Hindi a compulsory language in schools across the country.

However, the hate that was spewed by those who attended this Sunday’s ‘rally’ was peppered with  discussions “bogus anti-Muslim theories of Love Jihad, Mughal rule, increasing Muslim population, Shaheen Bagh protests, Rohingya refugees, etc,” reported Clarion. According to the report a participant alleged that “Christians were giving rice bags to poor Hindus to convert.” While some others mentioned the Uttar Pradesh elections due next year, a Bajrang Dal worker reportedly said if “Hindus do not awaken and support Hindu parties then UP will become Islamic state.”

Perhaps enthused by the lack of police action on the hate speech at his rally, Upadhyay has reportedly announced that he is planning similar gatherings in other cities: “Those who have not been able to come here today, I tell them I will now come to your city.”

As in the Delhi riots, violence is preceded by such incendiary and hate filled majoritarian speeches. Delhi police must take note. Unless it has and decided to do nothing. https://t.co/QZyLgJaB3k — Suhasini Haidar (@suhasinih) August 9, 2021

Not an isolated anti-Muslim incident

Delhi, is still nursing scars from the Anti-Muslim violence that took place in the North Eastern part of the city, the communal hate that emanated after the Tabhlighi Jamaat event at Nizamuddin, as well as the infamous hate speeches by politicians over the past two years. However, communal hate is being fueled afresh.

Recently, residents of Dwarka, a locality near the Delhi Airport, have written to Lt-Governor Anil Baijal, seeking cancellation of land allotment to construct a Haj House. The All Dwarka Residents Federation (ADRF), Delhi has written to the Lt-Governor Anil Baijal, who is also chairperson of the Delhi Development Authority (DDA), asking him to cancel the land allotment made for a Haj House in Sector 22. They have claimed that there is strong apprehension that this would disturb the “brotherhood, harmony and peace” in society. The Federation’s letter goes on to say that if the Haj House is allowed to be constructed in the area, law and order will be disturbed, there will be “every possibility of riots”, migration of Hindus and “repetition of situation like Shaheen Bagh, Jaffrabad (reference to the North East Delhi violence last year) and Kashmir”. SabrangIndia reached out to ADFR’s President Ajit Swami who revealed that the land cleared for the construction of the Haj building was earlier allotted to build a university. “If the government is allocating money, why not for something that can be used by every one and not just benefit one community,” he remarked. He said that he is speaking on behalf of all residents of Dwarka, and that if a Haj House needs to be built, the Muslim community should pay for it from their own pockets instead of using every taxpayer’s money.

Policeman who diffused a communal situation got trolled

A mazar at the beginning of the Azadpur flyover has also been targeted by communal forces who alleged that it is an encroachment. On August 2, a youtube ‘news’ portal  published a video from the Azadpur flyover in Delhi where SHO Adarsh Nagar had to intervene when a Hindutva group was “protesting” the shrine. It was SHO Adarsh Nagar, CP Bharadwaj, who had intervened and tried to stop any communal flare up.

“Who gave you the right to pressurize Indian citizens like this. If you want to take any action, take the legal recourse,” he told Vijay, the man who was objecting to the shrine adding that “as per the Supreme Court ruling, the Government Of Delhi had enacted a religious committee to take action on such complaints…. If this gentleman has any problem, he should submit an application to the Delhi government.” However, right wing portals and handles soon used this to attack the policeman himself. 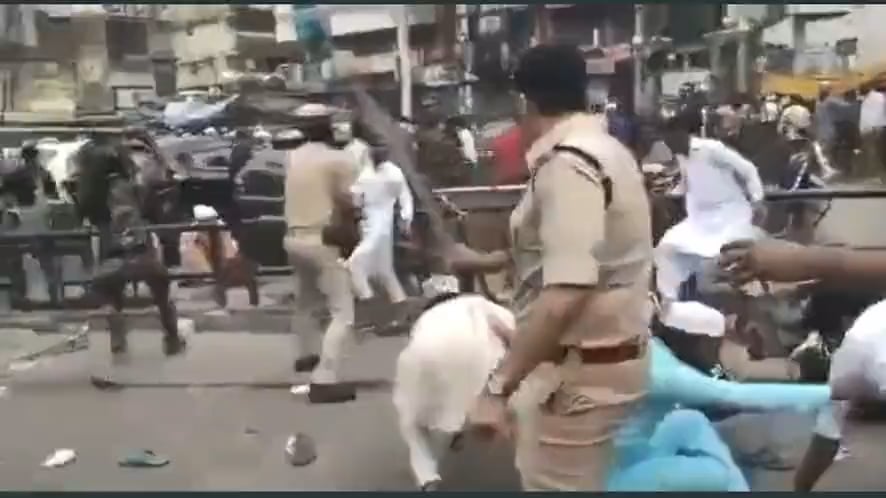 Where is freedom of expression? Peaceful protesters brutally assaulted by India under Modi