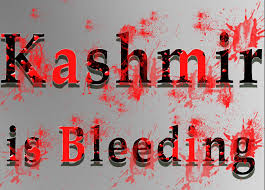 A report released by Kashmir Media Service said that 16 innocent Kashmiris were shot dead by Indian troops in the just concluding month of June while 68 people fell to Indian bullets in the first six months of the current year in IIOJK. The report pointed out that 95,806 Kashmiris were killed by troops from Jan 1989 till June 2021 in the occupied territory.

The report said that one more innocent Kashmiri youth fell to the bullets of Indian troops in Rajpora area of Pulwama district, today. It added that the troops have martyred nine innocent Kashmiris in different areas of the occupied territory in the last one week alone.

It maintained killing spree and other Indian brutal acts in IIOJK are aimed at suppressing the Kashmiri people’s resistance but they are determined not to submit to Indian barbarism, come what may.

The report said, the tyrant India is bound to taste defeat in IIOJK and the Kashmiris are destined to win freedom from Indian yoke. It also urged the civilized world to intervene and stop innocent killings in the occupied territory and help settle the lingering Kashmir dispute according to the UN resolutions and aspirations of the Kashmiri people.

5th phase of Khalistan Referendum being held in UK today

5th phase of Khalistan Referendum to be held in UK tomorrow