IIOJK conversion row: ‘No place for forced marriages in Islam’

July 1, 2021 IIOJK in focus Comments Off on IIOJK conversion row: ‘No place for forced marriages in Islam’ 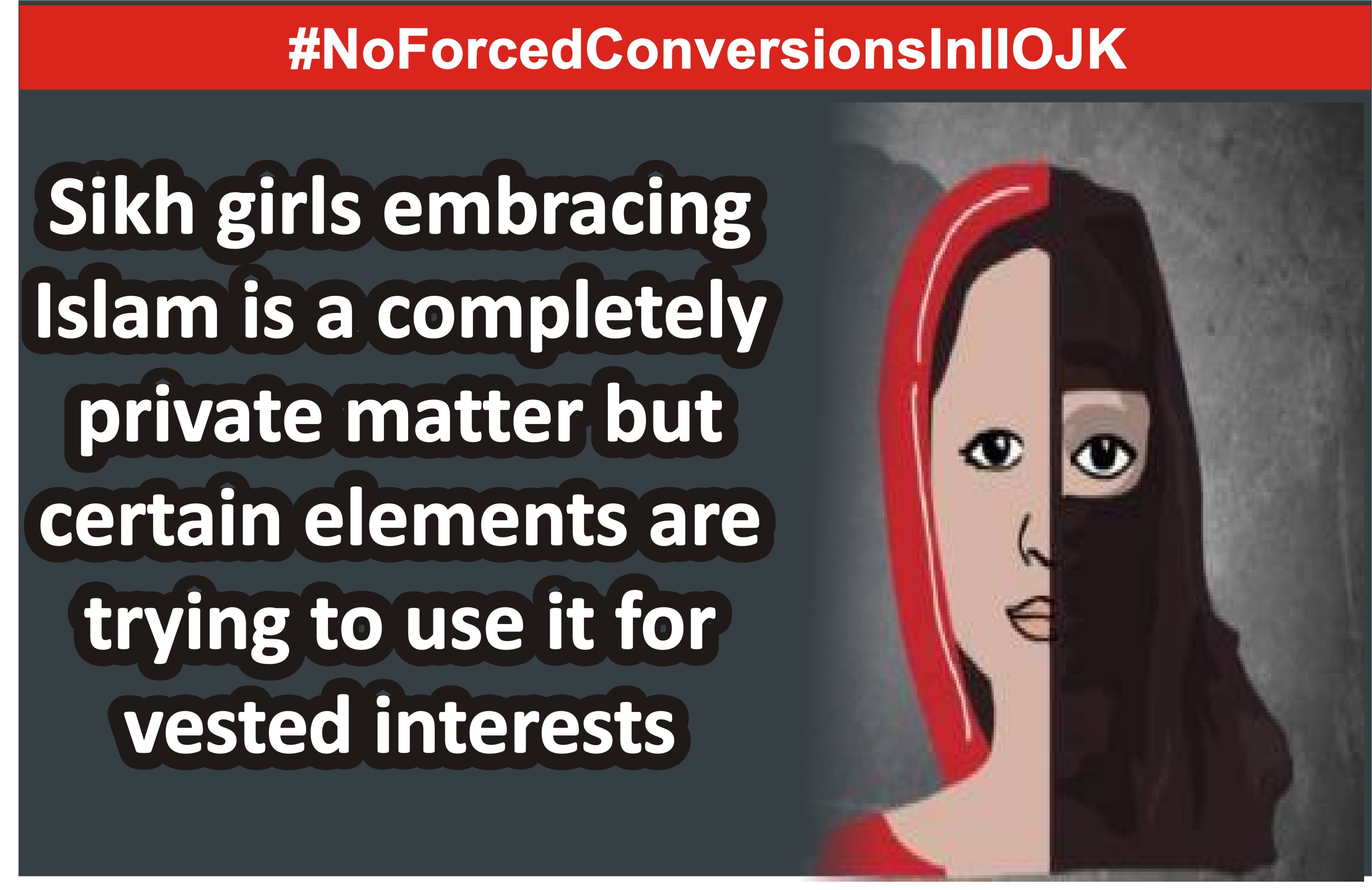 Islamabad, July 01 (KMS): Recent reports about forcible conversion of Sikh girls in Indian illegally occupied Jammu and Kashmir are not based on facts as there is absolutely no concept of forced conversions and forced marriages in Islam.

A report released by Kashmir Media Service said that even the two Kashmiri Sikh girls, about whom claims were made that they have been subjected to forced conversion and then married, appeared on social media to dismiss allegations being spread about them. It said, one of the Sikh girls had approached the IIOJK court for protection against harassment by family and told the court in Srinagar that she had changed her religion and married a Muslim man willingly.

The report referred to the Mutahida Majlis-e-Ulema Jammu and Kashmir (MMU) headed by Mirwaiz Umar Farooq statement wherein the ulema body also refuted the claims in some sections of media that two local Sikh girls had been forcibly converted to Islam for marriage. The report said that the MMU made it clear that Islam is a religion of peace, tolerance and harmony; and that there is absolutely no room for coercion or force in Islam. “It has in fact given freedom of religion to every sane and mature person. But if anyone of his/her own free will wants to accept Islam, that is a matter of choice,” the MMU said.

The KMS report said, Sikhs and Muslims must act wisely to defeat nefarious designs of communal forces in IIOJK and the people of Kashmir will not allow anyone to undermine the centuries-old atmosphere of religious tolerance in the territory. It pointed out that outside elements deliberately wanted to create a rift among Sikhs and Muslims in the territory, adding, Kashmiri Muslims share every grief and happiness with their Sikh brethren in IIOJK.

The report said, embracing Islam by Sikh girls is a completely private matter but certain elements are trying to use it for vested interests. It said, communal forces are trying to hurt the Sikh-Muslim brotherhood under the garb of vague incidents. Anyone trying to drive a wedge between Sikhs and Muslims in IIOJK is enemy of both the communities, it maintained.

The report said that Sikh leader, Jagmohan Singh Raina addressing a news conference in Srinagar deplored that outsiders were trying to provoke the situation for their vested interest. Some Delhi-based BJP-allied Sikh leaders tried to use forced conversion claims for their ulterior motives, it added.

The report also made a mention of the comments made by Sikh representative organization Shiromani Akali Dal President, S Paramjit Singh in this regard. S Paramjit Singh, addressing a press conference in Srinagar along with other members, said that there was no forcible conversion or marriage, which was being propagated by some people in the territory. He said, some people are trying to harm the brotherhood between Sikhs and Muslims in IIOJK. However, society has to play a role in defeating such designs, he said.