Muslim girl molested, father killed by Hindu goons in UP

June 30, 2021 IIOJK in focus Comments Off on Muslim girl molested, father killed by Hindu goons in UP 137 Views 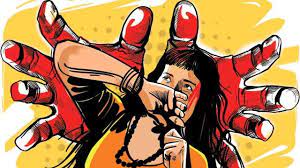 A 50-year-old Muslim man was beaten to death by three Hindu goons for objecting to his daughter’s molestation in Madaniya in Prayagraj district of UP.

The Hindu goons identified as Madhav Nishad, Kallu and Golu passed lewd comments on Sadia, the daughter of Majid Ali, when she had gone to a nearby mango orchard. They also forcibly caught her hand. She somehow managed to escape from their grip and reached home.

On knowing the incident, an outraged Majid Ali took along his son and went to the place of one of the aforementioned youth. There, they were caught by the eight Hindu goons and brutally assaulted. The father of the girl died due to assault.

RSS imposing Hindutva agenda through Waqf Board in IIOJK