Strict curfew in IIOJK on Eid-ul-Fitr

12 including Sehrai Martyred In Ramadan 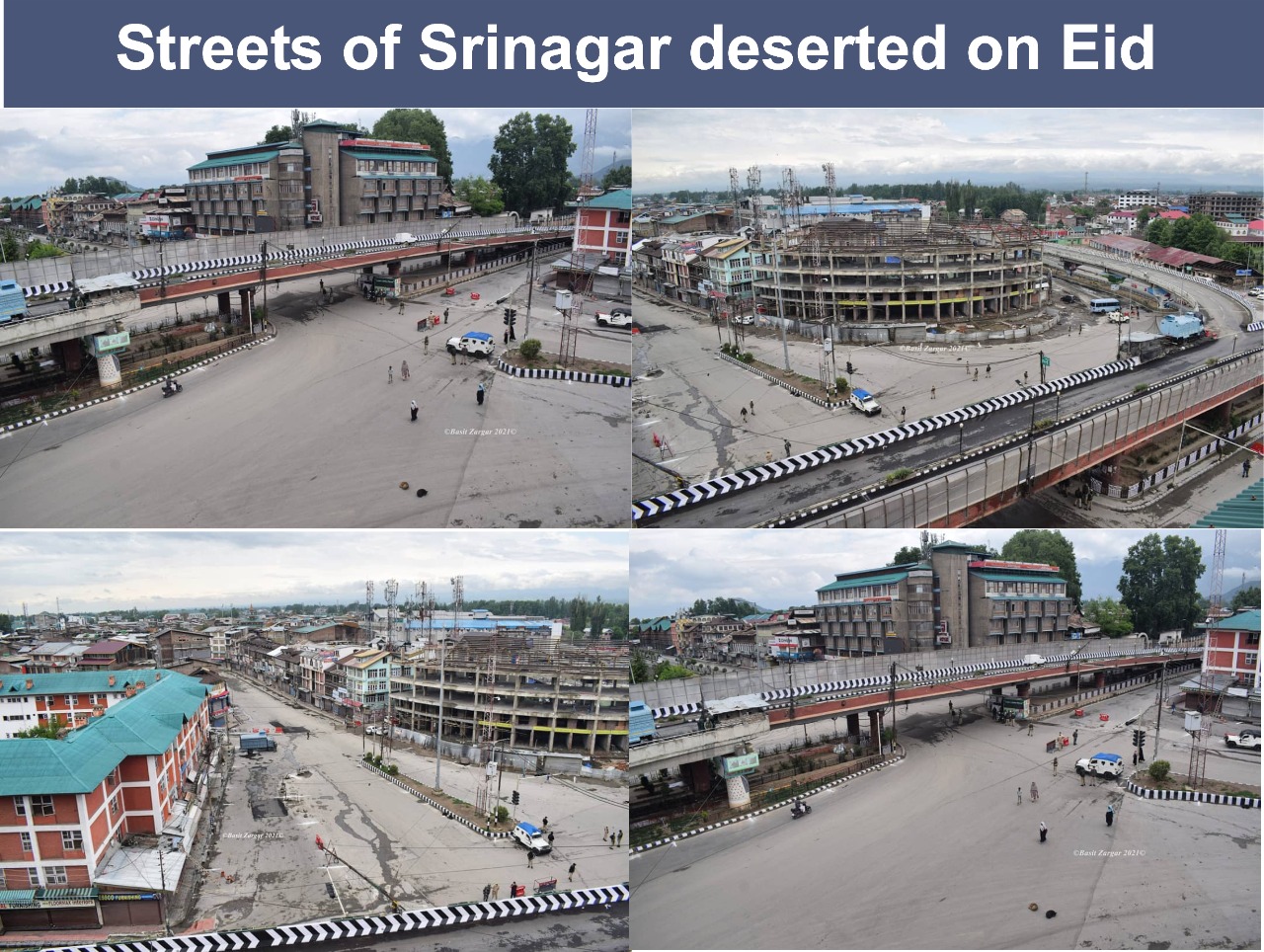 Srinagar, May 13 (KMS): In Indian illegally occupied Jammu and Kashmir, the authorities continued to impose strict curfew in Srinagar and other districts and towns to prevent people from offering Eid prayers, today.

The roads were blocked with concertina wires to stop pedestrian as well as vehicular movement. The Eid prayers could not be held at Dargah Hazratbal, historic Jamia Masjid and other masajid, shrines and eidgahs across the territory due to restrictions. Indian troops arrested five family members including a young girl during cordon and search operations in Wahibugh area of Pulwama district on Eid day, today.

The troops abused and harassed a photojournalist while he was covering the restrictions imposed by the occupation authorities in Saidakadal area of Srinagar. Two days ago, another photojournalist was also subjected to torture by police near Dal lake in the city. Additional Deputy Commissioner Baramulla ruthlessly beat up and kicked people including women in Baramulla town.

APHC General Secretary Molvi Bashir Ahmed Irfani in a statement issued in Srinagar, today, lashed out at the occupation regime for inflicting untold miseries on the innocent people of Kashmir. He termed the occupied territory as a police state where sanctity of law has lost its relevance in presence of nearly one million occupational troops.

It was pertinent to notice that once again the people of IIOJK showed affinity with the Islamic Republic of Pakistan by observing Eid-ul-Fitr with it, today. The Kashmiris remained glued to their TV screens unless Pakistani Roiet-e-Hilal Committee announced the sighting of the Shawwal moon at 11.30, last night. It has been a constant practice in occupied Jammu and Kashmir during the past over seven decades to observe two Eids and first Ramadan with the people of Pakistan and not with India. In India, Eid will be observed, tomorrow.

Meanwhile, a report released by Kashmir Media Service on Eid-ul-Fiter day, today, said while the whole Muslim Ummah enjoyed the blessings of holy month of Ramadan, the Muslims of Indian occupied Kashmir continued to remain under India’s strict military siege and faced violent cordon and search operations by the troops. The troops martyred 12 Kashmiris and injured over two dozen including photojournalists in 134 cordon and search operations during the month. In the same holy month, prominent Hurriyat leader Muhammad Ashraf Sehrai breathed his last in Udhampur jail, Jammu, due to inhuman conditions he was put to go through by the authorities.

Pro-freedom and pro-Palestine protests were held in Srinagar and other areas, despite strict restrictions. The protesters led by Dr Musaib shouted pro-freedom slogans in Batamaloo area of Srinagar after Eid prayers.

The Jammu and Kashmir Young Mens League’s Students Forum organised a protest rally in Muzaffarabad, today, against India and Israel over their continued persecution in the occupied territories. KMS

Like Loading...
Previous IIOJK people spent Ramadan under military siege
Next Kashmir dispute must be resolved as per UN resolutions: COAS