May 2, 2021 IIOJK in focus Comments Off on Shifting of IIOJK prisoners to different Indian jails condemned

Srinagar, May 02 (KMS): In Indian illegally occupied Jammu and Kashmir, the Jammu and Kashmir National Front (JKNF) has condemned in strong terms the shifting of Kashmiri prisoners from the territory to different jails of India.

The JKNF Spokesman, Shafiq-ur-Rehman in a statement issued in Srinagar deplored that amidst fast spreading coronavirus, shifting of the Kashmiri prisoners from valley to different parts of India was a criminal negligence and tantamount to endangering the prisoners’ lives.

He said that hundreds of Kashmiri prisoners were already languishing in Tihar, Haryana, UP, Tamil Nadu, Madya Pardesh and Karnatka jails of India.

Terming it as a deliberate attempt to punish Kashmiris, he said that the reckless step was taken at a time when the pandemic was claiming thousands of lives daily and prisons had been declared as hotbeds for the coronavirus disease.

Expressing his concern on the declining health condition of the hundreds of Kashmiri political detainees lodged in different jails in India, the spokesman said that in view of the massive spike in COVID deaths and infections the government of India should release the Kashmiri prisoners who were at a grave danger and risk of the COVID infection.

He said that disturbing reports pouring in from the Indian jails had been a matter of grave concern as many prisoners were reported to have contracted the deadly virus during the past couple of weeks. Referring to a news report, he said that most of the top-rank Hurriyat leaders lodged in notorious Tihar jail, including Nayeem Ahmed Khan, Shabbir Ahmed Shah, Muhammad Yasin Malik, Aasiya Andrabi, Massrat Alam Butt and Shahid-ul-Islam had been suffering from acute ailments.

“The family members of these prisoners are seriously concerned about the health and lives of their loved ones”, he said, adding that it was high time that the international community must press the Indian government to release all illegally detained political prisoners to ensure their safety.

Referring to the Indian occupation authorities’ mean tactics to suppress the dissent in the territory, the spokesman made it clear that Indian cruel policies couldn’t deter Kashmiris to pursue their long cherished goal for which the Kashmiris had rendered unprecedented sacrifices.

Jammu and Kashmir Political Resistance Movement Chairman Syed Umair in a statement said, even the judicial orders regarding prisoners were utterly disregarded and that prisoners were suffering from mental and physical torture. 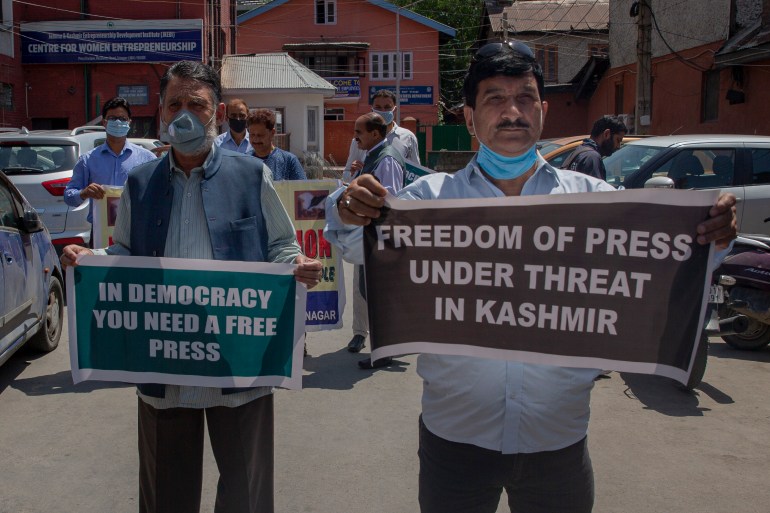